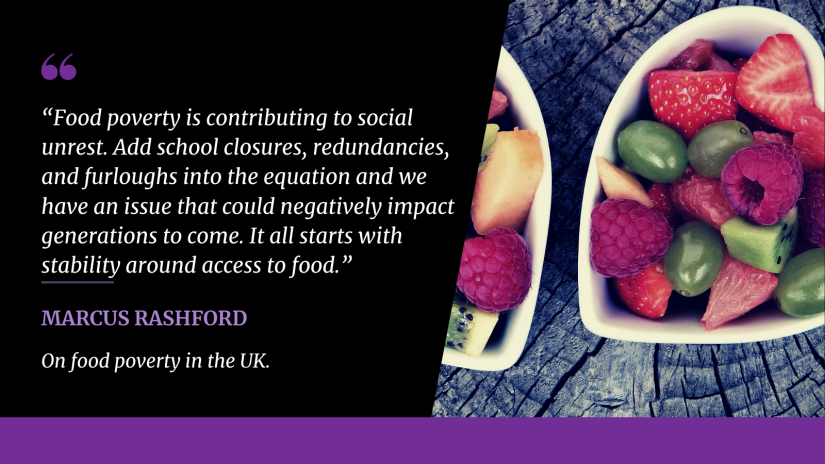 “Food poverty is contributing to social unrest. Add school closures, redundancies, and furloughs into the equation and we have an issue that could negatively impact generations to come. It all starts with stability around access to food.”

Last year, Marcus Rashford, a young professional footballer threw himself headfirst into a campaign to ensure children in the UK were not left hungry during the COVID-19 pandemic. Initially met by resistance from the government, he was able to bring about something that has been lacking for years – action.

However, it’s worth noting that the best way to eradicate food poverty is to understand what it is and how it comes about. Many people in economically well off countries struggle to understand how people can’t afford to feed themselves or their children.

Food poverty is the ‘inability of people and households to obtain an adequate and nutritious diet‘. It is one of the direct causes of malnutrition which is a major global issue in itself, affecting almost 2 billion people, including 52 million children.

To put this into perspective, London is the fifth-richest city. in the world and yet 2.3 million people living in the city are below the poverty line and a third of adults regularly skip meals because of poor finances. Within the UK, over 8 million people struggle to find or buy enough food to eat. This includes people who work and have families, children, the elderly, disabled and Black, Asian and minority ethnic groups.

Food poverty is caused by different forms of insecurity – whether it’s finances, employment or a long-standing history of not having enough, those who suffer are unable to maintain a healthy lifestyle. This can affect young children who are provided with school meals – often the only solid meal they receive in a day. Some parents will be forced to go without eating in order to feed their children – which will have a knock-on effect on the entire household. Working adults who earn enough money to just about cover their living expenses may find that they’re too well off for welfare, but too cash strapped to afford basic necessities like food.

The ongoing food poverty crisis has led to an increase in the use of food banks and the need for food banks. People are relying on them more because they don’t have enough money, or in some cases, they’re unable to obtain help from the welfare system. Factoring in increasing living costs and debt and poor mental health, food insecurity is often an extra added pressure on those who the worst off in society.

There has been some assistance provided by various organisations including an emergency packet from Trussell Trust in 2017 which provided help to those in disabled households. 75% went to people with ill-health and those who are financially insecure. The Trust found that BAME (Black, Asian and Minority Ethnic) people are more likely to experience poverty and food insecurity.

Why are so many people struggling in what is one of the world’s wealthiest economies?

Wealth is not typically spread across an economy. The average household income in UK is £29,900 (ONS, 2020). Major governments focus on balancing their finances and this can lead to austerity. This in turn trickles down to the most basic level of government and local authorities have no choice but to cut their budgets. At the same time, costs rise in other areas such as rent, bills and transport. The welfare systems designed to help the most at-risk in society are no longer able to do so, leaving millions of people vulnerable.

According to End Hunger UK, food poverty is now a public health emergency. Considering the current social climate, it’s clear the ongoing COVID-19 pandemic will and has contributed. Research commissioned by the Food Foundation revealed that three million people struggled to eat during the first national lockdown in the UK. This was caused by self-isolation, low funds and economic issues such as unemployment or lack of work (for example, people who work in the hospitality sector or fashion retail).

Adults who were working in February 2020 but lost their jobs within the period up to May or July were 2.5% more food insecure, showing how quickly the pandemic affected people.

The issues surrounding food poverty predate the coronavirus pandemic, but it has been thrown under a harsh spotlight and raised several key issues.

What needs to be done to ensure that food insecurity does not become worse?

The main solution is to keep the costs of food low, in line with rising costs of living. While wages have become more stagnant, food prices have continued to rise. With Brexit now in force, there is uncertainty across the board and the government should act now to prevent a spiralling crisis that cannot be contained.

The UK is not the only wealthy, economically developed country with food poverty issues. Major inequality within populations brings about food insecurity and it is estimated that 60m people in high-income countries rely on some form of food bank. This is a shocking statistic, especially considering how underreported it is.

When people hear about food poverty, malnutrition in poorer countries is usually the first thing that comes to mind. The notion of foreign aid and how it’s presented to us – low-income areas where the vast majority of the population live in poverty – can blind us from the realities of our own environments.

It can be startling to realise the food insecurity is happening within our communities and in a country as economically thriving as the UK.

Marcus Rashford on Child poverty in the UK

COVID-19: What impacts are unemployment and the Coronavirus Job Retention scheme having on food insecurity in the UK?

View all posts by purplexedscience